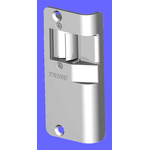 Adjustment to any mortise
lock

The chief problem with
procuring electric strikes to work with North American Mortise Locks is that
there is no standard or commonality among the lock manufacturers as to the
vertical position of the latch and dead latch pin in the standard ANSI 4 7/8
door preparation. This means that the electric strike must be specified and
purchased individually to suit the particular Lock model on the door. The
device is set by the installer in the field, just prior to installation, to
correspond to the Lock model. The latch cavity can be moved anywhere on the mortise
face with the finger plate occupying the space above and below the latch
cavity. The instructions show the correct setting for all North American mortise
lock models and adjustment is done quickly with a screw driver and allen wrench.